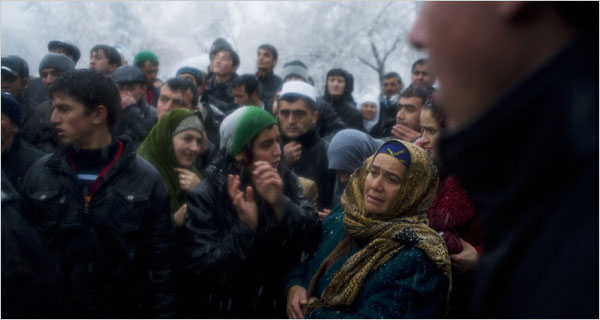 Tajiks gathered in Dushanbe last month to welcome pilgrims returning from Saudi Arabia.
DUSHANBE, Tajikistan — The crowd in the airport parking lot was jubilant despite the cold, with squealing children, busy concession stands and a tangle of idling cars giving the impression of an eager audience before a rock concert.

But it was religion, not rock ’n’ roll, that had drawn so many people: the Tajik families were waiting for their loved ones to land on a flight from Saudi Arabia, where they had taken part in the hajj, the annual Muslim pilgrimage to Mecca.

This did not use to happen. Tajikistan, a Muslim country north of Afghanistan, used to be part of the Soviet Union. Religion was banned, and any public expression of it, like prayer or making the hajj, was harshly punished.

A resurgence of Islam began here almost immediately after independence, in 1991, but years of civil war kept outward reflections of it, like the hajj, from appearing much.

Now, though, expressions of faith are flowering. At least 5,200 citizens of Tajikistan went on the hajj in 2008, more than 10 times the number who went in 2000, according to this country’s State Committee on Religion. Religious leaders have become important community figures, and Islamic political parties are permitted.

That enthusiasm was thick in the greeting crowd here, one of many that met the more than a dozen hajj flights in December. A woman whose first name is Marhabo, a 25-year-old mother of three, was waiting in the bitter cold with a 40-member extended family, most of them children.

“We’re Muslims,” she said brightly, hugging her small daughter closer to her in the cold. “Now there’s no limiting. Before, there were no mosques. Now there are many.”

It was close to midnight and the children were getting cranky. Marhabo’s sister-in-law bounced her own daughter, Medina, a small girl in a pink snowsuit, who was starting to cry.

There were many Medinas in the crowd, actually, named after another holy city in Saudi Arabia, in a fad that began here after the Soviet collapse.

The group was largely segregated, with women in bright scarves standing in clusters with the children behind the main arrivals area, where the men, some in traditional velvet robes, waited with camcorders to record the moment of arrival.

One old man with a long gray beard said he first made the pilgrimage in 1998. He took a bus that went through Iraq, “before,” his friend pointed out, “George Bush showed up.”

It used to be hard to be a believer here.

A man in his 30s whose first name is Akbar remembered running away from the Soviets when they caught him praying. His teacher ridiculed him for it, leaving him with a distinct dislike for school.

“Everyone was looking at me,” Akbar said. “I felt like a criminal.”

While the Tajiks’ newfound faith is thrilling for some, it has alarmed others, who worry that Islam’s popularity, combined with an economic crisis here, could lead to a surge of fundamentalism or militancy.

More than half the population lives on less than $2 each a day, and the country is currently experiencing a reverse industrialization: 77 percent of its population lives in rural areas, compared with 63 percent in the mid-1980s, said Khojamakhmad Umarov, a professor at the Institute of Economic Studies here.

Now, with migrant Tajik workers, the single largest contributors to the economy, facing an uncertain future in Russia, experts like Muzaffar Olimov worry that religious leaders will gain disproportionate power in society and that with the state education system in collapse, families will turn to religious schools for their children.

“The mullahs will make the weather,” said Mr. Olimov, who is director of Sharq, a research center here. “We have a model: our neighbor Afghanistan.”

But Tajik society is still strongly Soviet. New Year’s, a holiday celebrated in Soviet times with a decorated tree and presents, is still cherished, even in observant Muslim families.

“It’s not a Muslim holiday, but we like it,” Marhabo said, her small daughter reciting poetry she had learned in school for the occasion.

Marhabo talked about the meal they would have when they arrived at their home — a baked sheep. The government recently issued a rule forbidding families to spend too much money on weddings and other celebrations, a directive she said they were observing.

The plane from Saudi Arabia finally arrived. People threw candies, as if at a wedding, when they met their loved ones. Marhabo’s father, in a long white robe and a traditional hat, strode regally into their midst. He was met with an explosion of kisses.