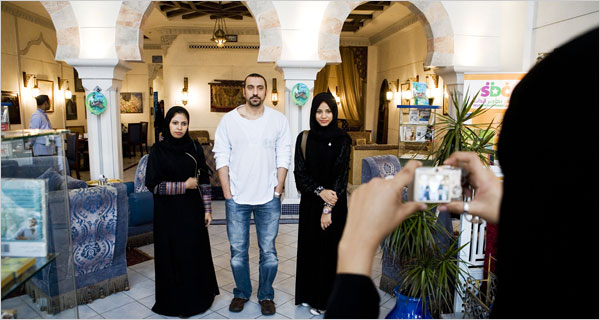 Ahmad al-Shugairi, host of a TV show on religious themes, with students at his cafe in Jidda.

JIDDA, Saudi Arabia — As Ahmad al-Shugairi took the stage, dressed in a flowing white gown and headdress, he clutched a microphone and told his audience that he had no religious training or titles: “I am not a sheik.”

Robert F. Worth on a new generation of television preachers in the Muslim world.

This is the last in a series of 11 articles examining the lives of the young across the Muslim world at a time of religious revival.

Previous Articles in the Series » 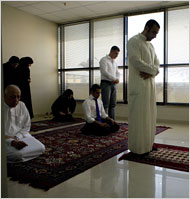 The Saudi preacher Ahmad al-Shugairi leading his staff in prayer during a break from work on his show “Khawater.” It runs daily during Ramadan.

Readers shared their thoughts on this article.

But over the next two hours, he worked the crowd as masterfully as any preacher, drawing rounds of uproarious laughter and, as he recalled the Prophet Muhammad’s death, silent tears. He spoke against sectarianism. He made pleas for women to be treated as equals. He talked about his own life — his seven wild years in California, his divorce, his children — and gently satirized Arab mores.

When he finished, the packed concert hall erupted in a wild standing ovation. Members of his entourage soon bundled him through the thick crowd of admirers to a back door, where they rushed through the darkness to a waiting car.

“Elvis has left the building,” Mr. Shugairi joked, in English, as he relaxed into his seat.

Mr. Shugairi is a rising star in a new generation of “satellite sheiks” whose religion-themed television shows have helped fuel a religious revival across the Arab world. Over the past decade, the number of satellite channels devoted exclusively to religion has risen from 1 to more than 30, and religious programming on general interest stations, like the one that features Mr. Shugairi’s show, has soared. Mr. Shugairi and others like him have succeeded by appealing to a young audience that is hungry for religious identity but deeply alienated from both politics and the traditional religious establishment, especially in the fundamentalist forms now common in Saudi Arabia and Egypt.

In part, that is a matter of style: a handsome, athletically built 35-year-old, Mr. Shugairi effortlessly mixes deep religious commitment with hip, playful humor. He earned an M.B.A. during his California years, and he sometimes refers to Islam as “an excellent product that needs better packaging.”

But his message of sincere religious moderation is tremendously powerful here. For young Arabs, he offers a way to reconcile a world painfully divided between East and West, pleasure and duty, the rigor of the mosque and the baffling freedoms of the Internet.

“He makes us attached to religion — sometimes with our modern life we get detached,” said Imma al-Khalidi, a 25-year-old Saudi who burst into tears when Mr. Shugairi, uneasy with his rock-star departure from the auditorium, returned to the hall to chat with a group of black-clad and veiled young women. There was an audible intake of breath as the women saw him emerge. A few bold ones walked forward, but most hung back, seemingly stunned.

“Before, we used to see only men behind a desk, like judges,” Ms. Khalidi said.

Mr. Shugairi is not the first of his kind. Amr Khaled, an Egyptian televangelist, began reaching large audiences eight years ago. But the field has expanded greatly, with each new figure creating Internet sites and Facebook groups where tens of thousands of fans trade epiphanies and links to YouTube clips of their favorite preachers.

Mr. Shugairi’s main TV program, “Khawater” (“Thoughts”), could not be more different from the dry lecturing style of so many Muslim clerics. In one episode on literacy, the camera follows Mr. Shugairi as he wanders through Jidda asking people where to find a public library (no one knows). In another, he pokes through a trash bin, pointing to mounds of rotting rice and hummus that could have been donated for the poor. He even sets up “Candid Camera”-style gags, confronting people who pocket a wallet from the pavement and asking them if the Prophet Muhammad would have done the same.

At times, his program resembles an American civics class disguised as religion, complete with lessons on environmental awareness and responsible driving.

Criticized From Both Sides

Inevitably, hard-line clerics dismiss Mr. Shugairi as a lightweight who toadies to the West. From the other side, some liberals lament that Mr. Shugairi and the other satellite sheiks are Islamizing the secular elite of the Arab world.

And while most of these broadcast preachers, including Mr. Shugairi, promote a moderate and inclusive strain of Islam, others do not. There are few controls in the world of satellite television, where virtually anyone can take to the air and preach as he likes on one of hundreds of channels.

Moreover, some observers fear that the growing prevalence of Islam on the airwaves and the Internet could make moderates like Mr. Shugairi steppingstones toward more extreme figures, who are never more than a mouse-click or a channel-surf away.

“There is no one with any real authority, they can say whatever they want to say, and the accessibility of these sheiks is 24/7,” said Hussein Amin, a professor at the American University in Cairo. “That’s why so many who were liberals are now conservatives, and those who were conservatives are now radicals.”