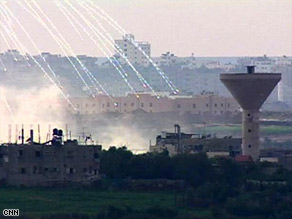 Israel is declining to say whether bursts like this over Gaza involve white phosphorus.

The group’s researchers in Israel “observed multiple air-bursts of artillery-fired white phosphorus over what appeared to be the Gaza City/Jabaliya area” on Friday and Saturday, the organization said on its Web site.

“Israel appeared to be using white phosphorus as an ‘obscurant’ [a chemical used to hide military operations], a permissible use in principle” under the laws of war, the HRW posting said.

“However, white phosphorus has a significant, incidental, incendiary effect that can severely burn people and set structures, fields, and other civilian objects in the vicinity on fire,” the posting said. “The potential for harm to civilians is magnified by Gaza’s high population density, among the highest in the world.”

HRW said the use of white phosphorus in Gazawould violate “the requirement under international humanitarian law to take all feasible precautions to avoid civilian injury and loss of life.”

Last week, an Israel Defense Forces spokesman told CNN: “I can tell you with certainty that white phosphorus is absolutely not being used.”

Now, however, Israeli officials have a different response to questions about the possible use of phosphorus: “Any munitions that Israel is using are in accordance with international law. Israel does not specify the types of munitions or the types of operations it is conducting.”

Still, a doctor familiar with the material said it is not possible to tell, based on pictures of burns, whether white phosphorus was responsible.

The chemical “can burn down houses and cause horrific burns when it touches the skin,” said Marc Garlasco, senior military analyst at Human Rights Watch.

Since January 3, when Israel began its ground offensive in Gaza, news reports have circulated about the possible use of white phosphorus by the IDF.

HRW’s assertion was supported by munitions experts and some Palestinian doctors, including Nafiz Abu Sha’aban, who said the burns it caused were unlike anything he has seen in 27 years of practice. Watch footage of burn patients in Gaza

Though most severely burned patients have been sent to Egypt, the ongoing fighting has made it impossible to evacuate all of them, including one man with deep burns over 47 percent of his body, the doctor said.

White phosphorus is known to burn flesh down to the bone.

It’s intended to provide illumination or to create a smokescreen in battle. Under an international protocol ratified by Israel in 1995, the use of such incendiary weapons is allowed when “not specifically designed to cause burn injury to persons.”

There is no prohibition per se against white phosphorus in conflict. But the timing and location of its use are restricted.

For example, it is illegal under the protocol to use white phosphorus against any personnel, civilian or military. It can be directed only against military targets. International law says incendiary weapons cannot be used where civilians are concentrated.

A house north of Gaza City was hit Sunday by something that observers contend may have been white phosphorus.

“It’s been burning since one o’clock in the morning,” Munir Hammada told CNN 11 hours later. “If you move it with your feet, it reignites. You can’t put it out with water, only sand.”

Those characteristics match the properties of white phosphorus, which ignites on contact with air.

E-mail to a friend

All About Israel • Gaza