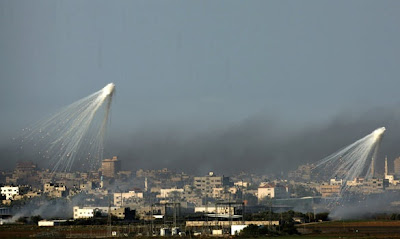 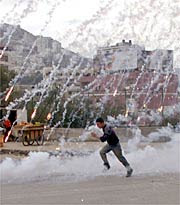 The US used this very same chemical weapon in the attack on Falluja in 2004. White phosphorous. The marines called their concoction ‘shake and bake’ as they used the chemical mixed with explosives against Iraqis in Falluja. Italian documentary filmmakers Sigfrido Ranucci and Maurizio Torrealtareported that the US used white phosphorous against civilians in Falluja, and showed images of incinerated bodies; the US denied the allegation. (Click here for a report comparing the injuries seen in Lebanon in 2006 with those seen in Gaza or for further evidence at Information Clearing House.) 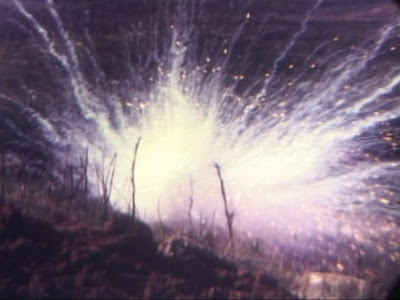 White phosphorous is a chemical weapon as soon as it is used directly against humans, a chemical weapon made illegal in 1980 by the Geneva Conventions. It was widely used in the Vietnam war by the US, as pictured here used in a grenade.

It ignites on contact with oxygen. Particles on a person can be temporarily extinguished with water, but as soon as they are dry they will recombust. Longer-term exposure causes poisoning, which leads to wounds of the mouth and eventual destruction of the whole jawbone.

Exposure to white phosphorus smoke in the air can also cause liver, kidney, heart, lung or bone damage and even death.

A former US soldier who served in Iraq says breathing in smoke close to a shell caused the throat and lungs to blister until the victim suffocated, with the phosphorus continuing to burn them from the inside.

White phosphorous is the chemical shown clearly in the many images of Gaza. It is easily recognizable by any veteran, thanks to our country’s long history of war crimes. White phosphorous was used against Lebanese civilians in 2006 in Israel’s war on Lebanon. The Israeli government maintains that it is only using white phosphorous as a smoke screen, but they refuse to release what is actually in the shells they are dropping on Gaza.

When there was a white phosphorous cloud simply hovering somewhere along a highway after an accident at a British plant, it was treated as a risk to public health and families were told to stay inside with windows and doors closed. Clearly, the lungs of Palestinian babies are not as worth protecting as the lungs of British ones.

This stuff is an illegal, incendiary poison. It’s being used right in front of our eyes in the most densely populated place on earth where greater than 50% are children. We probably manufactured it, and at the very least, we paid for it. This picture shows a white phosphorous shell exploding on the ground in Gaza. 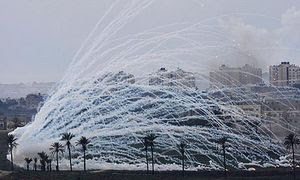 The ADC has called for an investigation into the use of white phosphorous in Gaza by the Israeli army. According to this former Major in the British army,

If white phosphorus was deliberately fired at a crowd of people someone would end up in The Hague. White phosphorus is also a terror weapon. The descending blobs of phosphorus will burn when in contact with skin.

The body of a child killed in Lebanon in 2006, when Israel dropped white phosphorous bombs.

WARNING: Not for the faint of heart. Then again, we should not be allowed to remain ignorant of the damage this chemical weapon causes while it is being used in Gaza. 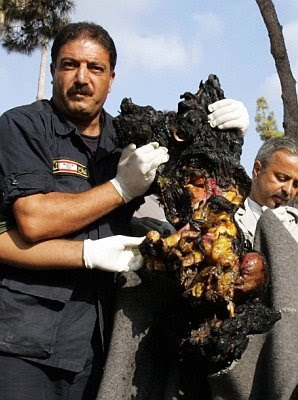