JERUSALEM (CNN) — U.N. Secretary-General Ban Ki-moon condemned an attack on a U.N. relief agency’s compound in Gaza City Thursday, which he and other U.N. officials say was committed by Israeli forces. 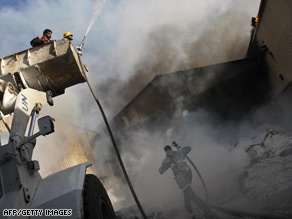 “[Israeli] Defense Minister Barak said to me it was a grave mistake and he took it very seriously,” Ban said at a news conference in Tel Aviv with Israeli Foreign Minister Tzipi Livni.

But Israeli government spokesman Mark Regev said the matter is still under investigation. When asked about Ban’s comment, Regev said Defense Minister Ehud Barak actually told the U.N. chief that “if it was Israel’s fire, it was a grave mistake.”

Regev said it was “not clear whose shells, whose fire hit the U.N. facility.”

Israeli forces moved into Gaza City overnight. During the clash with Hamas fighters, the U.N. Relief and Works Agency headquarters complex — located in a densely populated neighborhood — was hit repeatedly by shrapnel and artillery.

The burning compound emitted a massive pillar of billowing black smoke. Clashes around the compound in Gaza City made it impossible to extinguish the fires, UNRWA Director John Ging said.

An artillery shell struck one building wounded three workers, and the compound’s warehouse and workshop were burning out of control within an hour and a half, he said.

“We warned the Israelis hour by hour through the night of the vulnerabilities here as the shells came closer and closer and shrapnel was coming into the compound on a regular occasion,” Ging said. “Nonetheless, we have now been subjected to these direct hits.”

Ging identified the source of the fires as white phosphorus shells, whose use is restricted under international law.

The Israeli military did not immediately comment on the allegation. But the U.S.-based group Human Rights Watch has accused Israel of using white phosphorus shells in Gaza during its campaign againstHamas, the Palestinian militant group that has ruled Gaza since 2007.

Human Rights Watch said that although the use of white phosphorus to obscure military movements is legal, the substance can burn civilians and start fires in the densely populated territory.

Watch as civilians suffer most »

The Israel Defense Forces initially denied using the ordnance. But by Monday, Israeli officials said only that any shells fired in Gaza “are in accordance with international law.”

Regev said Hamas is also armed with phosphorus shells and has fired them at Israelis.

“Phosphorus shells were shot by Hamas from Gaza into Israel,” Regev said Thursday. “That was documented yesterday.”

Following the last two days of bombardment, the private relief agency CARE announced it was canceling its distribution of food and medical aid to the territory during Thursday’s fighting as well. Read an aid worker’s diary

UNRWA spokesman Christopher Gunness said the agency had urged both Israel and Hamas, which has been firing rockets into southern Israel, to heed the “conscience of the world” and comply with a U.N. resolution that calls for a cease-fire.

But he added, “I’m standing looking over the town of Beit Hanoun, and with every dull thud and every plume of smoke that comes out of there, it’s sad to say that the parties on the ground are not listening.”

E-mail to a friend

Eyewitness in Gaza: Yesterday and Tomorrow