CS: How Laura converted to Islam 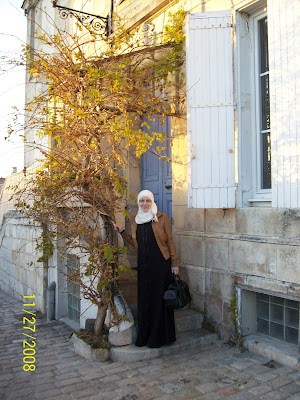 i love your pic Laura. You look so cute in abaya and hijab!

I just love her, her pic too and her story, it’s humbling to know that she found Allah just because she wants protection from this dangerous world and she found it on her own.

it is so sad that Laura beside her uncle and grandfather never heard Jesus’ good news… when I read converts stories most of them said that they were raised in Christian families but from their explanations is obvious that maybe they called themselves Christians but they didn’t have Jesus… they maybe went to church but they weren’t part of His body… BIG difference… Christians are those who follow Jesus in their action, words, lifestyle, who have His spirit in them, who are transformed by His Spirit and Word…. sorry, but I had to say this…

Natasa – for us that isnt the issue.. its usually because we grow up Christian but dont accept that God had a son or is apart of a trinity and so on. We believe God is ONE only.
When we come to know that Islam sees jesus as a prophet like all other prophets – then that makes sense to us.
Especially when jesus himself never said he was God and when asked he said basically “Everything i do is through God, i do nothing nothing of myself”

What a great story, I love this series.

Mash’Allah Laura, your story is so inspiring!!
Ange, I agree with Mona…keep them coming 🙂

MashaAllah Laura you’re story was inspiring! May Allah bless you and keep you protected. Ameen!

I know how Islam think of Jesus… but His words don’t allow this opinion… I just don’t understand why all of you converts say that you are “ex-Christians” when is obvious from yours testimonies that you didn’t have deep inner relationship with Jesus (I don’t speak of empty theology, christless religion, go-to-church thing)…

we cant have an inner-relationship or any kind of ‘relationship’ with jesus because he was a prophet. A messenger from God but still a man.

The only inner-relationship we can have is with God himself – not his prophets.

We look to prophets as an example of how to live our lives, but we dont claim to have them within us or have a relationship with them.

Salam. This is a very touching story. Thanks to both Laura and Ange. I love this series too.
Ruth

as salamu aleikum to you all.

thank u very much for all these sweet and warm words!!!
may Allah bless and guide us all, ameen.

@Ange: concerning that abaya, actually it was you who inspired me to wear abaya and so after some research on fashion and stuff i started to sew them by my self and now i just wear abaya and feel very happy. so thank you very much because u helped me to make this decision.
yazak Allah kheir

you should show us how you make them!

hehhee, ur soo sweet ur self dear!!! well, inshallah in february ill have more time to make a new abaya so then i
ll make some pictures inshallah and tell you how i did it… inshallah

Natasa: I WAS raised by a very practicing Christian family while not my own, and they are still most deeply accepting of my conversion to Islam (my Catholic mother is not, nor my agnostic father), but Ange is right, I personally had a deep relationship with Jesus, as I love him, but I rejected people saying he was the son of God. It is not a thing that made his life of any value. It is not a thing he ever said himself. It is not historically based, but is in fact imitation of some basic bleeding god mythology such as the Egyptian Horus, and some other Celtic God who is crucified, but very familiar to Romans and that area at the time. The Catholic Church (a little after early Christianity where there still hadn’t been the conference of Nicea—I am talking after they HAD the vote to decide Jesus was the son of God) the Church inherited the mythology of Isis for Mary, and Jesus’s story became woefully similair to a that of a Celtic pagan God who has crucified on a cross and rose from the dead. Anyways, as a Muslim, there were too many holes in the story to rely on it, even raised in the strong Christian practicing background I was surrounded in (the women in that household were more similar to my Islamic beliefs than indeed many Muslims).

Noor Dini: MashaAllah. May Allah S.W.T bless you and keep you safe, ameen.

Laura: May Allah S.W.T bless you also, increase your imaan, and keep you safe, ameen.

im actually reading a historical book now written by a clergyman of the church and its all about the beginnings of christianity in Rome.
Pixie is right – they threw so many different beliefs into Christianity from previous relligions.. then comes the Council at Nicea where they even voted on women’s roles in the Church and basically had them demoted in every way possible way. Even during this time some major Christian groups protested and denounced the Council’s version of Christianity and rejected the idea of Jesus being God and opposed this idea as sinful and against Jesus’ true teachings. But with Rome being Rome, their ‘put-together’ voted-on version reigned supreme and is now what we know as the Catholic Church.
So Natasa – as much as we all love Prophet Jesus and respect and follow his teachings, we do not accept that he is God. And we do not accept the Bible 100% because that book has been changed sooo much in History by the Church and Kings, that to this day no Bible we read today matches word for word the oldest Bibles still in human hands. and did you know that also at the Council of Nicea these men voted on what BOOKS would be included in the Bible? They excluded some books such as the Gospel of Barnabas which was actually written by a companion of Jesus (who by the way claims that Jesus was not God and purely a man and even states that jesus was angry at people who worshipped him) and instead decided to include 4 gospels by 4 men, who have no last names (bit strange for any historical writer) who lived after Jesus’ death and never met the man… and coincedently have word-for-word sentences in each other’s gospels, which makes Biblical Scholars theorise that they were copied off each other (in particular the gospel according to Mark.

Very beautiful & touching story!! Barak Allahu feeki for sharing it with us and inspiring us, Sister :
-D You do look very beautiful in the jilbab, BTW!

To Natasa & All: No Christian in this world today follows what Jesus truly taught. The only group of people who did were the people who lived during the Messiah’s time and followed his true message after he ascended into Heaven. They were of course persecuted for preaching Islam by way of Jesus’ statements.

(Why was there a vote for deciding if Jesus really was the “son of God”?)

Believing in the miracle birth of the blessed Virgin Maryam (who is accredited as being one of the most purest women in history and will be one of the 4 women leading us) is obligatory on every Muslim. To deny the birth, life and miracles of Jesus (by the permission of Allah) is to deny the Quran and various ahadith that speak of the matter.

I am glad you found a religion you can believe in. you never had that before your conversion. you never really knew Jesus before and don’t know Him know. you believe he was born miraculously, but don’t see hoe He could be a man and God at the same time. The One God of all that is created. The council of Nicea may have voted on that matter, but it was definitely not when that was first believed. Jesus Himself said He was God, Paul expressed that belief throughout the new testament. Hebrews and Colossians especially defend who Jesus Christ was thought to be. It’s not too late to get to know Him and Ii pray that you do.

look anon.. i could sit here and type away all my beliefs against the trinity, jesus as god, the nicea council, integration of pagan religions into christianity.. i would be here all day.
im firm in islam. you can pray all you want… it aint gonna happen.
pray for something more important – like peace for palestine.
And when you pray – make sure it is to God and not to Jesus – so Allah will hear you.

@Natasa
To be a Christian one dont need to have a deep inner relationship with Jesus. They belief in the basic principal of Christianity..either they pactice it or not that was a different matters all together. Many Christian in the world doest life as Christian should.Some merely a born Christian, the attand the sunday church yet doent have deep inner relationship wth the Jesus. Many of them in the US, and they happily celebrated the christmas…
Looking at your words, you have read(learn?) a bit about Islam and their prophets. I would encourage you my dear, to read some more…
I won’t accentuate anything here, just read and ponder. be fair and weight between the two.untill then have a interesting journey then.

@laura
Salam,
Yours case is not an isolated cases, many has been travel the same journey before you and saw the significant differences beween their old faith and the religion of Islam. The new gain knowledge have englighten then like never before…especially for the Cristian they can reconnect the chain of events and fill the gap that is abundance in the Bible(of many version) as well as the contradiction within the scriptures themself.

IPV6 –
that is a pefect way to describe it..

filling in the gaps and reconnecting. that is exactly how i felt when i was still not a muslim but learning about islam.. i felt like i was putting the missing pieces of a puzzle together

Ange and Pixie, you two gave great explanations for your beliefs.
Laura: I wish I has as much stregth as you. May Allah SWT continue to bless you.

salam laura,
may Allah be with u ALWAYS 🙂 ur story really have touched me today.

As a christian before, it should’nt be any difficulty to see the contradict scriptures in their holly book(as some part has been long lost(due to effect of nature and unsophisticated writting material) and some parts has been alter by human to their liking), on how many big wing and factions that don’t even recognized others as Christian..

hi Laura!
your post intrigued me so much that i couldnt sleep for like 2 nights! I am also german and 20 years old…and still struggling with my faith! It’s amazing how your mother accepted your choice…i wished my mum would, too!

umm, there are so many questions i’d love to ask you…

Is Islamic Finance the new challenge to Wall Street?

‘Go back and die in Gaza’