LONDON — Prime Minister Recep Tayyip Erdogan of Turkey is a man of brisk, borderline brusque, manner and he does not mince his words: “Hamas must be represented at the negotiating table. Only then can you get a solution.” 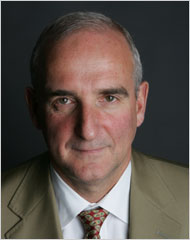 We were seated in his suite at London’s Dorchester Hotel, where a Turkish flag had been hurriedly brought in as official backdrop. Referring to Mahmoud Abbas, the beleaguered Fatah leader and president of the Palestinian Authority, Erdogan said, “You will get nowhere by talking only to Abbas. This is what I tell our Western friends.”

In an interview on the eve of President Barack Obama’s visit to Turkey, his first to a Muslim country since taking office, Erdogan pressed for what he called “a new balance” in the U.S. approach to the Middle East. “Definitely U.S. policy has to change,” he said, if there is to be “a fair, just and all-encompassing solution.”

A firm message from Israel’s best friend in the Muslim Middle East: the status quo is untenable.

How Hamas is viewed is a pivotal issue in the current American Middle East policy review. The victor in 2006 Palestinian elections, Hamas is seen throughout the region as a legitimate resistance movement, a status burnished by its recent inconclusive pounding during Israel’s wretchedly named — and disastrous — “Operation Cast Lead” in Gaza.

The United States and the European Union consider Hamas a terrorist organization. They won’t talk to it until it recognizes Israel, among other conditions. This marginalization has led only to impasse because Hamas, as an entrenched Palestinian political and social movement, cannot be circumvented and will not disappear.

Former Senator George Mitchell, Obama’s Middle East envoy, has expressed support for reconciliation between Hamas and Fatah. I think this should become a U.S. diplomatic priority because it is the only coherent basis for meaningful peace talks. Erdogan called Mitchell “perfectly aware and with a full knowledge, a very positive person whose appointment was a very good step.”

The Turkish prime minister, who leads Justice and Development, or AKP, a party of Islamic inspiration and pragmatic bent, earned hero’s status in the Arab world when he walked out on the Israeli president, Shimon Peres, during a debate earlier this year in Davos. Any regrets?

“If I had failed to do that, it would have been disrespectful toward myself and disrespectful of the thousands of victims against whom disproportionate force was being used,” Erdogan said. He alluded to the children killed in Gaza — 288 of them according to the United Nations special rapporteur — and asked: “What more can I say?”

Erdogan, 55, urged Obama to become “the voice of millions of silent people and the protector of millions of unprotected people — that is what the Middle East is expecting.”

He went on: “I consider personally the election of Barack Hussein Obama to have very great symbolic meaning. A Muslim and a Christian name — so in his name there is a synthesis, although people from time to time want to overlook that and they do it intentionally. Barack Hussein Obama.”

I suggested that synthesis was all very well but, with a center-right Israeli government just installed, and its nationalist foreign minister already proclaiming that “If you want peace prepare for war,” the prospects of finding new bridges between the Wes
t and the Muslim world were remote.

“Your targets can only be realized on the basis of dreams,” Erdogan said. “If everyone can say, looking at Obama, that is he is one of us, is that not befitting for the leading country in the world?”

Dreams aside, I see Obama moving methodically to dismantle the Manichean Bush paradigm — with us or against us in a global battle of good against evil called the war on terror — in favor of a new realism that places improved relations with the Muslim world at its fulcrum. Hence the early visit to Turkey, gestures toward Iran, and other forms of outreach.

This will lead to tensions with Israel, which had conveniently conflated its long national struggle with the Palestinians within the war on terror, but is an inevitable result of a rational reassessment of U.S. interests.

I asked Erdogan if Islam and modernity were compatible. “Islam is a religion,” he said, “It is not an ideology. For a Muslim, there is no such thing as to be against modernity. Why should a Muslim not be a modern person? I, as a Muslim, fulfill all the requirements of my religion and I live in a democratic, social state. Can there be difficulties? Yes. But they will be resolved at the end of a maturity period so long as there is mutual trust.”

The problem is, of course, that Islam has been deployed as an ideology in the anti-modern, murderous, death-to-the-West campaign of Al-Qaeda. But Erdogan is right: Islam is one of the great world religions. Obama’s steps to reassert that truth, and so bridge the most dangerous division in the world, are of fundamental strategic importance.

Synthesis begins with understanding, which is precisely what never interested his predecessor.

Al-Nakba: The Palestinian Catastrophe of 1947-48