New Delhi: To discuss the possibilities of launching professional courses on Islamic economics, finance and banking at madrasas in India, a two-day national workshop being participated by representatives of all leading madrasas from across the country and Islamic economists from India and abroad began today at Convention Hall of Jamia Hamdard in New Delhi. 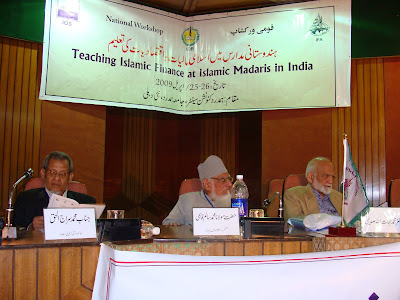 Talking to TwoCircles.net on the sidelines of the workshop, Usmani said: “Students at Islamic madrasas in India read books of Fiqh written 700-800 years ago. Those books talk of Islamic financial issues. But there is a need to look at those issues in light of today’s requirements and changes.” This program is first such initiative in the country in this regard, he added.

Due to global economic crisis and failure of the prevailing financial system of the world, economists, financial experts and industrialists world over are looking up to Islamic finance and economic system with hope. Islamic economic system has become a topic of discussion in universities, research centers and debates in various western and European countries. But it is a great irony that madrasas are focusing on Fiqh and Hadees. They are not teaching Islamic finance in modern perspective. They are not giving required attention to the Quran which talks about the basics of Islamic economic and financial system. 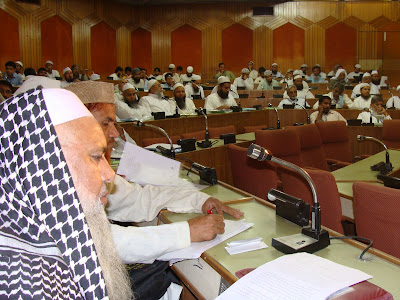 “It is an irony that Islamic finance is not a topic of discussion at madrasas and among Islamic scholars in India today. Islamic madrasas give little attention to Islamic economic system in the present scenario. They are focusing on Fiqh and Hadees, not even Quran. They debate on whether or not science, maths and computers be made part of madrasa syllabus but they do not discuss Islamic finance,” says veteran journalist A U Asif.

That Islamic finance in modern perspective is not being taught at madrasas is not just India phenomenon was evident from the speech of Dr Ausaf Ahmad, Islamic economist and ex-official of IDB. No big madrasa in any country is giving required focus to Islamic finance and economics, he said. 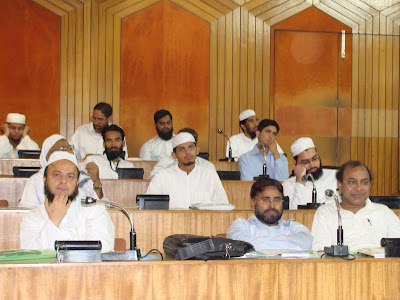 Speaking on the occasion he said: “Jamia Al Azhar has about 1.2 lakh students, of which 20,000 from foreign countries. They give more attention to traditional Islamic subjects than to Islamic finance. Similar is the situation at Ummul Qura University in Makkah. There too little focus is given to Islamic economics, banking and finance.”

In his speech, Dr Muhammad Manzoor Alam, Chairman, IOS, suggested launching of courses on Islamic economics and finance in various universities and madrasas so that “our madrasa graduates could assess the demands of today and fast changing economic condition.” He said such courses have been launched at Aligarh Muslim University and Jamia Islamia at Shantapuram, Kerala.

In his keynote address on Teaching Islamic finance at Islamic Madrasas in India, renowned Islamic economist Dr Muhammad Najatullah Siddiqi said: “Teaching of Islamic finance in madrasas would be different from other subjects taught there. Unlike other traditional Islamic subjects where all focus is on texts and explanation thereof, Islamic finance and economics will be taught in the perspectives of time and place.” Besides, as Islamic financial system has been operational in several parts of the world for 30-40 years, the madrasa syllabus of Islamic finance will include critical analysis of the operation and its results, Dr Siddiqi, who is also Shah Faisal awardee, said.

“The syllabus should also give information about the texts of Quran and Hadis regarding prohibitions in financial issues like prohibition of interest as well as what was understood from such instructions in the past,” he said and added the syllabus should include development of contemporary Islamic financial system and differences of Ulema over running Islamic banking system.

Maulana Rabe Hasani Nadvi in his message gave a call for acceleration of efforts for strengthening Islamic economic system in the country. He supported the idea that Islamic finance and economic system should be made part of madrasa syllabus.

Old mice grow young again in study. Can people do the same?

US Killing of Innocent Civilians Goes on Apace in Afghanistan