To Protect an Ancient City, China Moves to Raze It 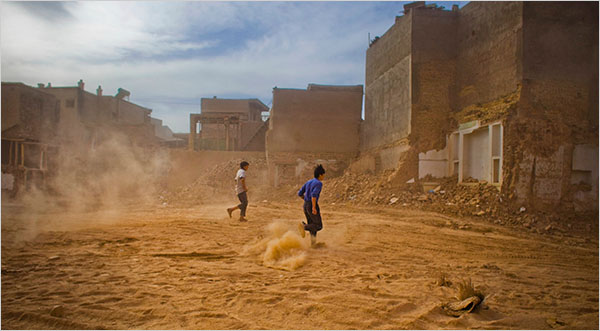 Preservationists say the demolition of the Old City section of Kashgar,
top, is a blow to China’s Islamic and Uighur culture. But work has
already begun, center, to raze about 85 percent of the area.

KASHGAR, China — A thousand years ago, the northern and southern branches of the Silk Road
converged at this oasis town near the western edge of the Taklamakan
Desert. Traders from Delhi and Samarkand, wearied by frigid treks
through the world’s most daunting mountain ranges, unloaded their pack
horses here and sold saffron and lutes along the city’s cramped
streets. Chinese traders, their camels laden with silk and porcelain,
did the same.

A City, and People, at a Crossroads 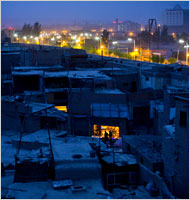 Preservationists say the demolition of the Old City section of Kashgar is a blow to China’s Islamic and Uighur culture.

Readers shared their thoughts on this article.

The
traders are now joined by tourists exploring the donkey-cart alleys and
mud-and-straw buildings once window-shopped, then sacked, by Tamerlane
and Genghis Khan.

Now, Kashgar is about to be sacked again.

Nine
hundred families already have been moved from Kashgar’s Old City, “the
best-preserved example of a traditional Islamic city to be found
anywhere in central Asia,” as the architect and historian George
Michell wrote in the 2008 book “Kashgar: Oasis City on China’s Old Silk Road.”

Over
the next few years, city officials say, they will demolish at least 85
percent of this warren of picturesque, if run-down homes and shops.
Many of its 13,000 families, Muslims from a Turkic ethnic group called
the Uighurs (pronounced WEE-gurs), will be moved.

In
its place will rise a new Old City, a mix of midrise apartments,
plazas, alleys widened into avenues and reproductions of ancient
Islamic architecture “to preserve the Uighur culture,” Kashgar’s vice
mayor, Xu Jianrong, said in a phone interview.

Demolition is
deemed an urgent necessity because an earthquake could strike at any
time, collapsing centuries-old buildings and killing thousands. “The
entire Kashgar area is in a special area in danger of earthquakes,” Mr.
Xu said. “I ask you: What country’s government would not protect its
citizens from the dangers of natural disaster?”

Critics fret about a different disaster.

“From a cultural and historical perspective, this plan of theirs is stupid,” said Wu Lili, the managing director of the Beijing Cultural Protection Center, a nongovernmental group devoted to historic preservation. “From the perspective of the locals, it’s cruel.”

Urban reconstruction during China’s long boom has razed many old city centers, including most of the ancient alleyways and courtyard homes of the capital, Beijing.

Kashgar,
though, is not a typical Chinese city. Chinese security officials
consider it a breeding ground for a small but resilient movement of
Uighur separatists who Beijing claims have ties to international
jihadis. So redevelopment of this ancient center of Islamic culture
comes with a tinge of forced conformity.

Chinese officials have
offered somewhat befuddling explanations for their plans. Mr. Xu calls
Kashgar “a prime example of rich cultural history and at the same time
a major tourism city in China.” Yet the demolition plan would reduce to
rubble Kashgar’s principal tourist attraction, a magnet for many of the million-plus people who visit each year.

But
Kashgar is missing from China’s list of proposed sites. One foreign
official who refused to be identified for fear of damaging relations
with Beijing said the Old City project had unusually strong backing
high in the government.

The project, said to cost $440 million,
began abruptly this year, soon after China’s central government said it
would spend $584 billion on public works to combat the global financial
crisis.

It would complete a piecemeal dismantling of old
Kashgar that began decades ago. The city wall, a 25-foot-thick earthen
berm nearly 35 feet high, has largely been torn down. In the 1980s, the
city paved the surrounding moat to create a ring highway. Then it
opened a main street through the old town center.

Still, much of
the Old City remains as it was and has always been. From atop 40
vest-pocket mosques, muezzins still cast calls to prayer down the
narrow lanes: no loudspeakers here. Hundreds of artisans still hammer
copper pots, carve wood, hone scimitars and hawk everything from
fresh-baked flatbread to dried toads to Islamic prayer hats.

And
tens of thousands of Uighurs still live here behind hand-carved poplar
doors, many in tumbledown rentals, others in two-story homes that vault
over the alleys and open on courtyards filled with roses and cloth
banners.

The city says the Uighur residents have been consulted
at every step of planning. Residents mostly say they are summoned to
meetings at which eviction timetables and compensation sums are
announced.

Although the city offers the displaced residents the
opportunity to build new homes on the sites of their old ones, some
also complain that the proposed compensation does not pay for the cost
of rebuilding.

“My family built this house 500 years ago,” said a
beefy 56-year-old man with a white crew cut, who called himself Hajji,
as his wife served tea inside their two-story Old City house. “It was
made of mud. It’s been improved over the years, but there has been no
change to the rooms.”

In Uighur style, the home has few
furnishings. Tapestries hang from the walls, and carpets cover the
floors and raised areas used for sleeping and entertaining. The winter
room has a pot-bellied coal stove; the garage has been converted into a
shop from which the family sells sweets and trinkets. Nine rooms
downstairs, and seven up, the home has sprawled over the centuries into
a mansion by Kashgar standards.

Have we forgotten Shibli Nomani ?