Kochi: Showing their loyalty to the BJP government of Karnataka, the Mysore city police on July 9 attacked on and arrested hundreds of peaceful demonstrators of the Popular Front of India who were demanding release of two hundred innocents including dozens of PFI activists arrested on July 6 in connection with the Mysore communal clash. 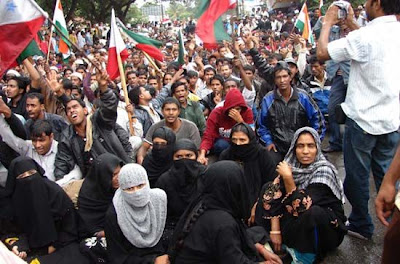 Popular Font of India members stage a protest on Bangalore Road in Mysore on Thursday demanding the release of people who were arrested during Kyatamaranahalli violence.

The PFI had organized a Jail Bharo Andolan yesterday afternoon even though Section 144 was in force in the place. The people had assembled at the Fountain Circle. They were peacefully demanding the release of more than 210 innocent people arrested in connection with the communal clashes in Mysore. The people were sitting peacefully and offering voluntary arresting. A group of local women activists of PFI marched in to join the protest. As they reportedly resisted arresting by the police and refused to disperse the police unjustifiably resorted to lathicharge and bursting of tear gas to disperse the protestors. Several people were severely wounded in the lathicharge and the stampede-like situation that followed.

With the police arresting 200 more people yesterday the total number of people arrested so far in relation with the communal clashes in Mysore has reached to 400. None have been released yet.

The state leaders of the PFI including President K Abdul Latheef and General Secretary Afsar Pasha who had been arrested on the spot have not yet been released. Talks are going on with the higher authorities of the police for the release of the leaders and others, said Abdur Razak, a PFI official. 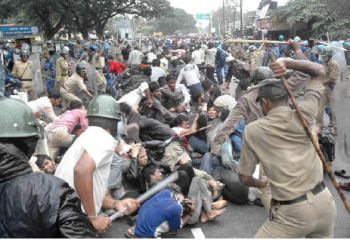 Communal clashes broke out in Udayagiri and nearby places in Mysore on 2nd July when a masjid compound was desecrated by miscreants. The violence that followed took lives of three including a 14-year old, who people say, was killed in police firing. Police had to resort to firing to disperse the angry mob. Prohibitory orders were imposed in the areas till July 6th and then extended to 13th.

A World Leader’s Comments On The War On Terrorism