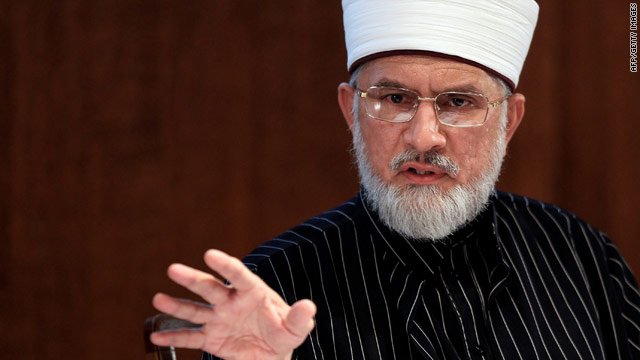 Tahir ul-Qadri, founder of the Minhaj-ul-Quran International, announces his fatwa in London on Tuesday.
STORY HIGHLIGHTS

Islamabad, Pakistan (CNN) — A fatwa, or religious ruling, issued this week is roiling theological waters after it took aim at those notorious for targeting others: terrorists.

The anti-terrorism fatwa by renowned Muslim scholar Muhammad Tahir ul-Qadri pulled no punches, declaring that terrorism was “haraam,” or forbidden by the Quran, and that suicide bombers would be rewarded not by 72 virgins in heaven, as many terrorist recruiters promise, but with a suite in hell.

Qadri, the founder of the Minhaj-ul-Quran International, an Islamic movement with centers in 90 countries, told a news conference in London, England, on Tuesday that his decree categorically condemns terrorism and suicide bombings in the name of Islam.

“Until now, scholars who were condemning terrorism were conditional and qualified what they said,” Qadri said in a phone interview, noting that his 600-page ruling left no room for interpretation. “I didn’t leave a single, minor aspect that, in the mind of radicals or extremists, can take them to the direction of martyrdom.”

The 59-year-old Pakistani scholar called his fatwa an “absolute” condemnation, going as far as to label the terrorists themselves “kafirs,” a term in the Quran meaning “unbeliever.”

“This fatwa has the potential to be a highly significant step towards eradicating Islamist terrorism,” Quilliam, a counter-extremism think tank based in London, said in a statement.

Manan Ahmed, assistant professor of Islam in South and Southeast Asia at the Institute for Islamic Studies in Berlin, agreed, calling the fatwa “unprecedented.”

“This is a landmark theological study — a careful and systematic treatment of a thousand years of legal tradition dealing with armed resistance against the state, rules of engagement, aspects. The fatwa itself … is categorically and comprehensively against terrorism in any form and for any cause,” Ahmed said.

Many skeptics questioned whether an intellectual dismantling of al Qaeda’s religious philosophy could have any impact on recruiting terrorists in places like Pakistan, where many potential foot soldiers don’t have access to education, much less academic discourse.

Ahmed says it can.

I didn’t leave a single, minor aspect that, in the mind of radicals or extremists, can take them to the direction of martyrdom.
–Tahir ul-Qadri
var cnnRelatedTopicKeys = [];
RELATED TOPICS

“This is not an academic or an intellectual argument alone. This is a theological argument, based in the Qur’an and Sunnah [practice of the Prophet],” Ahmed said. “What it provides are easily available argumentation and proof for the millions of preachers across Pakistan, who can, in turn, incorporate this into their weekly sermons.”

Ahmed says where it will undoubtedly leave an indelible mark is online. Just this week, U.S. Army Brig. Gen. John Custer, head of intelligence at the U.S. military’s Central Command, told the CBS program “60 Minutes” that “without a doubt, the Internet is the single most important venue for the radicalization of Islamic youth.”

Salman Ahmad, the lead singer of the Pakistani rock band “Junoon” and author of “Rock & Roll Jihad: A Muslim Rock Star’s Revolution,” says it’s young men in the West who can be influenced the most by Qadri’s arguments.

“The fatwa by the Pakistani Islamic scholar is an important positive religious ruling and it has been made in the West, where a lot of young impressionable Muslim kids are being brainwashed by the terrorists to commit murder and suicide in the name of Islam,” Ahmad said.

“It’s about time Osama bin Laden and al Qaeda realize that Muslims will not allow their faith and identity to be hijacked by a bunch of thugs masquerading as holy men.”

Top Five Fruits to keep you Cool this Summer