American Muslims Ask, Will We Ever Belong? 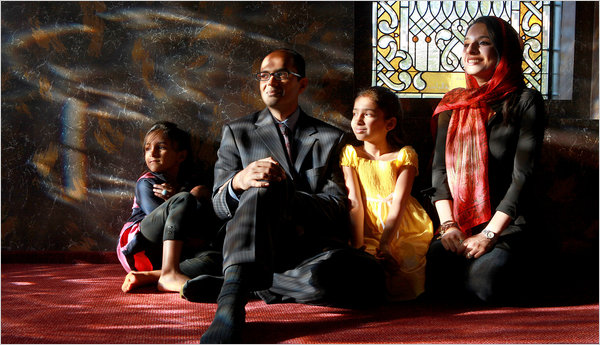 Dr. Ferhan Asghar at a Muslim center in West Chester, Ohio, with his wife, Pakeeza, and daughters Zara, left, and Emaan.

For nine years after the attacks of Sept. 11, many American Muslims made concerted efforts to build relationships with non-Muslims, to make it clear they abhor terrorism, to educate people about Islam and to participate in interfaith service projects. They took satisfaction in the observations by many scholars that Muslims in America were more successful and assimilated than Muslims in Europe.

Eboo Patel, the director of an interfaith youth group, said some politicians were whipping up fear and hatred of Muslims.

Now, many of those same Muslims say that all of those years of work are being rapidly undone by the fierce opposition to a Muslim cultural center near ground zero that has unleashed a torrent of anti-Muslim sentiments and a spate of vandalism. The knifing of a Muslim cab driver in New York City has also alarmed many American Muslims.

“We worry: Will we ever be really completely accepted in American society?” said Dr. Ferhan Asghar, an orthopedic spine surgeon in Cincinnati and the father of two young girls. “In no other country could we have such freedoms — that’s why so many Muslims choose to make this country their own. But we do wonder whether it will get to the point where people don’t want Muslims here anymore.”

Eboo Patel, a founder and director of Interfaith Youth Core, a Chicago-based community service program that tries to reduce religious conflict, said, “I am more scared than I’ve ever been — more scared than I was after Sept. 11.”

That was a refrain echoed by many American Muslims in interviews last week. They said they were scared not as much for their safety as to learn that the suspicion, ignorance and even hatred of Muslims is so widespread. This is not the trajectory toward integration and acceptance that Muslims thought they were on.

Some American Muslims said they were especially on edge as the anniversary of 9/11 approaches. The pastor of a small church in Florida has promised to burn a pile of Korans that day. Muslim leaders are telling their followers that the stunt has been widely condemned by Christian and other religious groups and should be ignored. But they said some young American Muslims were questioning how they could simply sit by and watch the promised desecration.

They liken their situation to that of other scapegoats in American history: Irish Roman Catholics before the nativist riots in the 1800s, the Japanese before they were put in internment camps during World War II.

Muslims sit in their living rooms, aghast as pundits assert over and over that Islam is not a religion at all but a political cult, that Muslims cannot be good Americans and that mosques are fronts for extremist jihadis. To address what it calls a “growing tide of fear and intolerance,” the Islamic Society of North America plans to convene a summit of Christian, Muslim and Jewish leaders in Washington on Tuesday.

Young American Muslims who are trying to figure out their place and their goals in life are particularly troubled, said Imam Abdullah T. Antepli, the Muslim chaplain at Duke University.

Mr. Antepli just returned from a trip last month with a rabbi and other American Muslim leaders to Poland and Germany, where they studied the Holocaust and the events that led up to it (the group issued a denunciation of Holocaust denial on its return).

“Some of what people are saying in this mosque controversy is very similar to what German media was saying about Jews in the 1920s and 1930s,” he said. “It’s really scary.”

American Muslims were anticipating a particularly joyful Ramadan this year. For the first time in decades, the monthlong holiday fell mostly during summer vacation, allowing children to stay up late each night for the celebratory iftar dinner, br
eaking the fast, with family and friends.

But the season turned sour.

The great mosque debate seems to have unleashed a flurry of vandalism and harassment directed at mosques: construction equipment set afire at a mosque site in Murfreesboro, Tenn; a plastic pig with graffiti thrown into a mosque in Madera, Calif.; teenagers shooting outside a mosque in upstate New York during Ramadan prayers. It is too soon to tell whether hate crimes against Muslims are rising or are on pace with previous years, experts said. But it is possible that other episodes are going unreported right now.

“Victims are reluctant to go public with these kinds of hate incidents because they fear further harassment or attack,” said Ibrahim Hooper, spokesman for the Council on American-Islamic Relations. “They’re hoping all this will just blow over.”

Some Muslims said their situation felt more precarious now — under a president who is perceived as not only friendly to Muslims but is wrongly believed by many Americans to be Muslim himself — than it was under President George W. Bush.

Mr. Patel explained, “After Sept. 11, we had a Republican president who had the confidence and trust of red America, who went to a mosque and said, ‘Islam means peace,’ and who said ‘Muslims are our neighbors and friends,’ and who distinguished between terrorism and Islam.”

Now, unlike Mr. Bush then, the politicians with sway in red state America are the ones whipping up fear and hatred of Muslims, Mr. Patel said.

“There is simply the desire to paint an entire religion as the enemy,” he said. Referring to Imam Feisal Abdul Rauf, the founder of the proposed Muslim center near ground zero, “What they did to Imam Feisal was highly strategic. The signal was, we can Swift Boat your most moderate leaders.”

Several American Muslims said in interviews that they were stunned that what provoked the anti-Muslim backlash was not even another terrorist attack but a plan by an imam known for his work with leaders of other faiths to build a Muslim community center.

This year, Sept. 11 coincides with the celebration of Eid, the finale to Ramadan, which usually lasts three days (most Muslims will begin observing Eid this year on Sept. 10). But Muslim leaders, in this climate, said they wanted to avoid appearing to be celebrating on the anniversary of 9/11. Several major Muslim organizations have urged mosques to use the day to participate in commemoration events and community service.

Ingrid Mattson, the president of the Islamic Society of North America, said many American Muslims were still hoping to salvage the spirit of Ramadan.

“In Ramadan, you’re really not supposed to be focused on yourself,” she said. “It’s about looking out for the suffering of other people. Somehow it feels bad to be so worried about our own situation and our own security, when it should be about empathy towards others.”

A version of this article appeared in print on September 6, 2010, on page A1 of the New York edition.

Batla and post-Batla incidents in Azamgarh were planned years ago: rights activists

Afghans believe US is funding Taliban