Projector phone still sounds like a dream, but we already have four
phones launched with that capability. There is no dearth of innovation
in the thought to pack things into one single mobile phone. Intex,
TechBerry and Spice have launched their respective projector phones.
Intex was the pioneer in this field closely followed by Techberry.

But it was the late entrant Spice which popularized projector phone with its “Yeh boat nahin”
ad of Spice Popkorn. The timing of the phone launch and the ad is icing
on the cake. Spice Popkorn ad pops up in the middle of a world cup
match. And the ad surely stands out in the middle of bunch of
thoughtless ads. 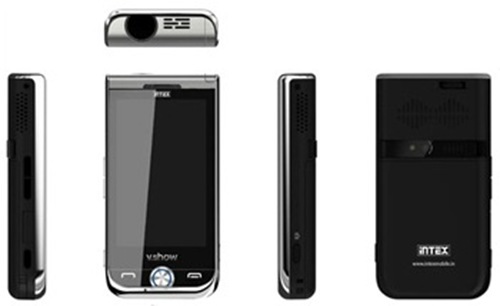 Intex V.Show uses tiny Pico which is the latest in the LED technology to project on to a36 inch screen size for 3 hours. 20,000 hours of play time on the projector is possible. After
which it will cease to be a projector and starts to be a phone-only. It
is a touch screen phone with 3.2 inch screen size. It is a dual SIM
phone (GSM+GSM). As per mainstream media this is a 3G enabled phone. As per blogosphere this is a dual SIM
phone. It has a dual camera – one in the front, one in the back and it
has dual memory card slots which can read up to 8 GB each. ST in the phone name stands for Sachin Tendulkar. I am not kidding.
That’s what the press release said. This phone which was launched
immediately after Intex V.show has some amazing double features. In
addition to the projector of course.

It packs in dual-SIM capability, dual memory card capability and dual
camera of 2 megapixel each. ST200 has a 3.2 inch QVGA full touch
screen. ST200 is a GSM phone with Bluetooth on-board. Spice M-9000 is a dual SIM phone with a in-built projector. It also
comes with a analogous TV which will help you stream free-to-air
channels, you know like the good old Doordarshan. There is a document
viewer, in case you want to project a presentation on the side wall in
the middle of a Christopher Nolan movie. Spice M-9000 aka Popkorn, has a 3.2 megapixel camera, FM with recording, Bluetooth, video player and a 6 cm QVGA screen. All of this comes at a measly price of Rs. 6999. Intex V.Show Mini has a 2.4 inch QVGA screen, dual SIM capability, 2
megapixel camera and an internal memory of 87 MB. Memory can be jacked
up to 16 GB through a SD card. Bluetooth, 3.5 mm audio jack, FM radio
are on-board. Pre-loaded apps like Facebook and Opera Mini should take
care of the browsing needs. V.Show Mini has a document reader which
would make it easy to project the presentations in case you office
projector acts kinky. Price : Rs. 6300

For the price, features and marketing, Spice Popkorn
should be the winner all the way. It packs in impressive features at
affordable price. With its TV on-board feature, it has went past all
other projector phones. Even if the TV is for free to air channels like
Doordarshan. Phone replacing TV isn’t very far.

Jihad Against the Abuse of Jihad