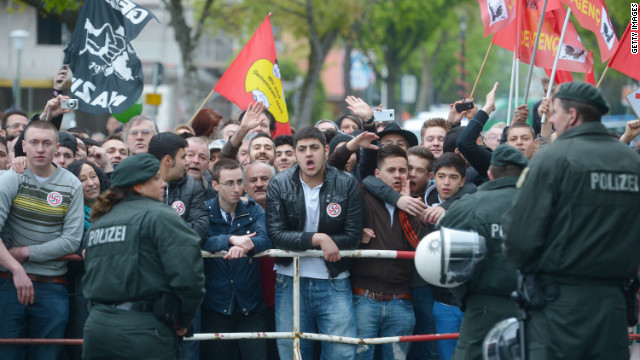 In May, counter-demonstrators, above, stand near police barricades as a far-right, anti-Islam political party protests outside a mosque in Germany.
June 7th, 2012
01:36 PM ET
Share
Comments (31 comments)

Editor’s note: Jonathan Laurence is associate professor of political science at Boston College and a Nonresident Senior Fellow at the Brookings Institution. He is the author of “The Emancipation of Europe’s Muslims.” The opinions expressed in this commentary are solely those of Jonathan Laurence.

By Jonathan Laurence, Special to CNN

Last month saw a series of riots in Europe, not over the wobbly Euro, but instead over the integration of Muslim Europeans and immigrants. In Bonn, hundreds of German Muslims clashed with police in a violent reaction to a far-right political party’s anti-Muslim gathering. The angry young men who chanted “God is Great” while battling police in the streets have reignited the ongoing debate over Islam’s place in Europe, a debate which has risen to the top of many politicians’ concerns. The German president said in a newspaper interview that while German Muslims clearly “belong” to the country, it is less clear whether or not Islam does.

But something arguably much more meaningful, if less newsworthy, took place days later. Groups representing hundreds of thousands of German Muslims condemned the violence and called on constituents to fulfill the civic duty of voting in regional elections that month.

Extremists such as the Salafist sympathizers who rioted are a miniscule fraction of this minority population: security services estimate their number in the low thousands, out of around 4.3 million Muslims in Germany. But as the French Salafist murderer of Toul
ouse proved in March, even very few of them can have a ruinous effect. Above all, they are a painful reminder of an era when European governments – in denial that Muslims would settle permanently – ignored who was doing the teaching and preaching of Islam on their territories.

A number of the social, cultural and political adjustments that will characterize Europe in coming generations are now under way, although often the results are not visible to the naked eye. Yet the most serious threats to integration — violent extremism among Muslims and right-wing nativism within “host societies” — are slowly being weakened by a confluence of old-fashioned integration processes in society and demographic trends.

The population of Muslim background in Europe will go from 16 million to around 27 million in the next 20 years, increasing the number of Muslims in European countries to more 7–8 percent (from 3.7 percent in 2008) — and to as high as 15–16 percent in France and Germany.

But the key development is that as the proportion of Muslims of foreign nationality residing in Europe decreases – because the number of native-born Muslims is growing – Europe’s democratic political institutions are increasingly kicking in. For decades, the absence of integration policy allowed foreign governments and transnational movements to capture the religious and political interests of this new minority. This wasn’t multiculturalism so much as indifference.

The series of terrorist attacks against Western capitals from 2001-2005, however, in combination with high unemployment and educational under-performance, ended Europeans’ hands-off approach. After leaving them outside domestic institutions for decades, governments gradually took ownership of their Muslim populations. Authorities began to treat Islam as a domestic religion and encouraged Muslims to embrace national citizenship.

This brought the religion out of the embassies and basements and into national institutions and proper mosques. Many of the rights and state oversight that other religious communities receive are slowly being extended to Islam councils, such as the German Islam Conference, which just held its seventh annual convention. Everything from imam training to animal slaughter to religious school curriculum has come under greater scrutiny and is being adapted – sometimes painfully — to fit where Muslims now live and work.

The resolution of practical problems related to Islamic observance helps reduce the tensions stemming from the religion’s relative new-ness, such as prayer-goers lying prone on sidewalks or blocking traffic, or anti-Semitic or other radical proselytizing in prisons because of an insufficient number of trained chaplains – which at least partly accounts for the radicalization of the Toulouse killer. The continued routinization of religious freedoms will also diminish the significance of religious inequality as a mobilizing issue in Muslim identity politics.

The normalization of Muslims’ participation in political life will also give a small voice in government to advocates of all partisan stripes. In just the past two weeks a French woman of Moroccan origin was named press secretary and a British politician became the first Muslim woman to join the national cabinet. Last year, three German women with a Turkish background became state-level ministers. These success stories join dozens of parliamentarians and hundreds of city councilors of Muslim background – and even a major party leader in Germany – of every political persuasion, across the continent.

Backlash against Muslim integration will continue to come from opposite corners. From the populist movements that are in a stronger position because of the recession and the currency crisis, and from foreign governments and international movements that don’t intend to let go without a fight.

But for every instance of Salafist “outrage” there are many more signs of Muslims’ social and political normalization. After the extremist group began to distribute millions of free Qur’ans, the Bundestag member Mehmet Kilic, a Green party politician with Turkish roots, distributed hundreds of copies of the German constitution in response.

When the Franco-Algerian soccer star Samir Nasri called out “Allahu Akbar” in a post-match interview celebrating his team’s championship this spring, he sounded more like a local Tim Tebow than an existential threat to Europeans’ way of life.

Why Sochi Has No Mosques