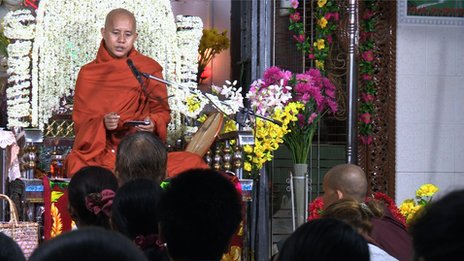 This week, religious violence has once again flared in Myanmar, formerly known as Burma. Hundreds of Muslim homes have been burnt to the ground in Sagaing region after being attacked by Buddhist mobs.

In just over a year, more than 200 people, mostly Muslims, have been killed and many more displaced as unrest has spread from Rakhine state in the west to towns across the country.

Many are blaming a controversial monk and the nationalist organisation he helps lead for the rising tensions.

In a classroom at one of Mandalay’s most famous monasteries, a teacher is at work. Shin Wirathu is taking a class of young monks at Masoeyin through the five precepts or pillars of the Buddhist faith.

This morning, he is lecturing on the importance of avoiding sexual misconduct.

“Yes, venerable monk,” the young men chant in unison, as Wirathu softly delivers his advice on the need to avoid temptation. 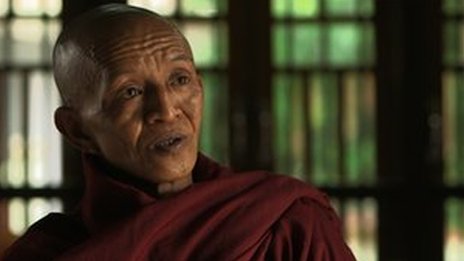 When the class is over, he shows me outside. On the wall of the monastery courtyard are graphic posters of the Buddhist victims of recent religious and ethnic violence in Rakhine state in western Myanmar.

They are unpleasant viewing. The pictures from October last year show dead children with their heads cut open and the bodies of women with their internal organs spilling out of their torsos.

Wirathu said he put them up as a reminder to Buddhists that the country is under attack from Muslim “invaders”.

“Muslims are only well behaved when they are weak, ” he said. “When they become strong, they are like a wolf or a jackal; in large packs they hunt down other animals.”

Wirathu believes there is a Muslim “master plan” underway to turn Myanmar into an Islamic state.

If he is right, it is a long-term project. Latest estimates suggest that of Myanmar’s 60 million people, 90% are Buddhist and about 5% Muslim.

“Over the past 50 years, we have shopped at Muslim shops and then they became richer and wealthier than us and can buy and marry our girls,” Wirathu said. “In this way, they have destroyed and penetrated not only our nation but also our religion.” 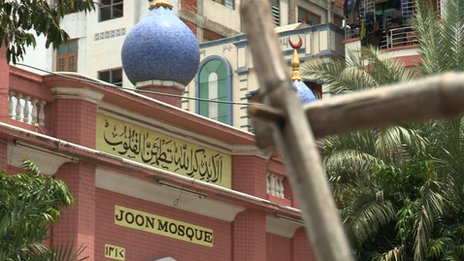 Muslims keep watch over Joon Mosque, the biggest in Mandalay, every night

Wirathu’s solution lies in a controversial nationalist organisation called 969. It calls on Buddhists to shop, sell property and marry within their own religion.

Small, brightly-coloured stickers have been distributed to clearly brand businesses as Buddhist-owned.

Supporters of 969 argue it is a purely defensive organisation, created to protect Buddhist culture and identity. Listening to the rhetoric of Wirathu and 969’s leaders, there is no doubt it is squarely aimed at Muslims.

“In the past, there was no discrimination based on religion and race. We all stayed together in a brotherly way,” Wirathu said. “But when their [Muslim] master plan has been revealed we can no longer stay quiet.”

From Rakhine state in the west, to more central towns like Meiktila and Okkan, the link is being made between heightened religious tensions and the preaching and activities of monks and 969.

The outbreaks of violence usually have a depressing symmetry.

A small flashpoint, often a crime or perceived insult, perpetrated by a Muslim against a Buddhist, triggers a disproportionate wave of reprisals against the entire Muslim community.

Ten years ago, under the military junta, Wirathu was jailed for his anti-Muslim views. Now in these times of change, his message is widely disseminated through social media and DVDs. Far from being condemned, Wirathu now has backing from the very top.

In June, as his infamy reached its peak, Wirathu appeared on the front cover of Time magazine labelled “The face of Buddhist terror”. Burmese monks were outraged and Myanmar’s President Thein Sein quickly leapt to Wirathu’s defence.

The Time issue was banned and a statement released with the president lauding Wirathu as a “son of Lord Buddha”. 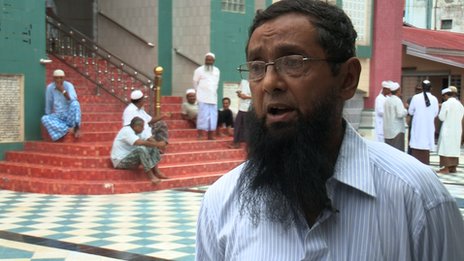 There is no shortage of theories inside Myanmar as to why Wirathu is now flavour of the month.

One theory is that continuing ethnic and religious violence could be used by the military as a pretext for maintaining a dominant role in Burmese politics. It is certainly an argument Myanmar’s generals have made before.

“We are also wondering about this,” Kaylar Sa, a monk jailed for his part in the Saffron revolution of 2007, told me as he chain-smoked his way through a pack of Red Ruby cigarettes.

He pointed out that the government has acted decisively and violently to end monk-led demonstrations against an army-backed copper mine last year, and yet now was unwilling to tackle them over hate speech.

“At the moment, we firmly believe that the 969 movement is unnecessary,” he said. “If this movement continues to be taken seriously, it could become an obstacle to democratic reform.”

A short drive from Wirathu’s monastery, Muslim volunteers guard Joon Mosque, the biggest in Mandalay, each night. The men told me that in the event of a Buddhist attack, they expect no protection from the (Buddhist-dominated) police or the army.

Smar Nyi Nyi, a veteran of the 1988 student uprising and one of the elders at the mosque, took me to one side. He expressed views that many Burmese share, that shadowy elements within the establishment are stoking the unrest.

Some Muslims cling to the hope that there exists a silent majority of moderate Buddhists a
ppalled by recent events, secretly rooting for them.

“Most of the Buddhists, they are just onlookers ” a retired Muslim doctor tells me with a shrug. “A few might pass a heartfelt regard and say they’re sorry, but that doesn’t come above the surface.”

For Wirathu, each fresh outbreak of religious conflict reinforces his view that Myanmar is part of a global war on militant Islam and that he is being badly misunderstood.

“We don’t use drones – we haven’t killed [Osama] Bin Laden or Saddam Hussein or the Taliban,” he told me.

“We are just preaching and posting on the internet and Facebook for the safety and security of our nation. If we are all protecting our own nation who’s the bad guy – Wirathu or Barack Obama?”

Ahead of Iraq Deployment, 37 Korean Troops Convert to Islam

10 Indian Things Loved the World Over

Gaza is a concentration camp, and it’s an American delusion not to recognize that — Weschler