Why are Buddhist monks attacking Muslims? 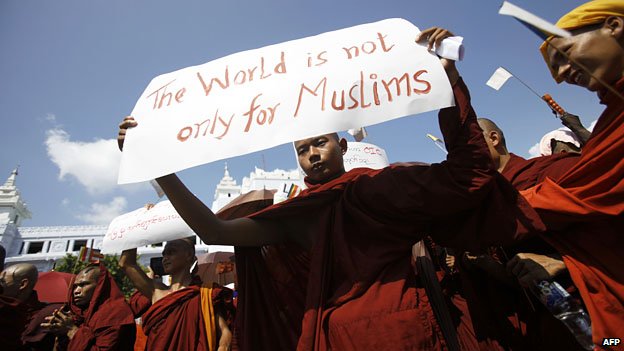 Of all the moral precepts instilled in Buddhist monks the promise not to kill comes first, and the principle of non-violence is arguably more central to Buddhism than any other major religion. So why have monks been using hate speech against Muslims and joining mobs that have left dozens dead?

This is happening in two countries separated by well over 1,000 miles of Indian Ocean – Burma and Sri Lanka. It is puzzling because neither country is facing an Islamist militant threat. Muslims in both places are a generally peaceable and small minority.

In Sri Lanka, the issue of halal slaughter has been a flashpoint. Led by monks, members of the Bodu Bala Sena – the Buddhist Brigade – hold rallies, call for direct action and the boycotting of Muslim businesses, and rail against the size of Muslim families.

While no Muslims have been killed in Sri Lanka, the Burmese situation is far more serious. Here the antagonism is spearheaded by the 969 group, led by a monk, Ashin Wirathu, who was jailed in 2003 for inciting religious hatred. Released in 2012, he has referred to himself bizarrely as “the Burmese Bin Laden”. 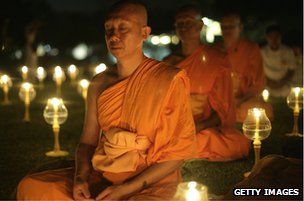 Buddhist teachings were handed down orally and not written until centuries after the Buddha’s lifetime. The principle of non-violence is intrinsic to the doctrine, as stressed in the Dhammapada, a collection of sayings attributed to the Buddha.

Its first verse teaches that a person is made up of the sum of his thoughts: “If a man speaks or acts with an evil thought, pain follows him, as the wheel follows the foot of the ox that draws the carriage.”

The most basic principles of Buddhist morality are expressed in five precepts, which monks are obliged – and laymen encouraged – to follow. The first is to abstain from killing living creatures.

One objective of Buddhist meditation is to produce a state of “loving kindness” for all beings.

Verse five of the Dhammapada tells us that: “Hatred does not cease by hatred at any time: hatred ceases by love, this is an eternal rule.”

March saw an outbreak of mob violence directed against Muslims in the town of Meiktila, in central Burma, which left at least 40 dead.

Tellingly, the violence began in a gold shop. The movements in both countries exploit a sense of economic grievance – a religious minority is used as the scapegoat for the frustrated aspirations of the majority.

On Tuesday, Buddhist mobs attacked mosques and burned more than 70 homes in Oakkan, north of Rangoon, after a Muslim girl on a bicycle collided with a monk. One person died and nine were injured.

But aren’t Buddhist monks meant to be the good guys of religion?

Aggressive thoughts are inimical to all Buddhist teachings. Buddhism even comes equipped with a practical way to eliminate them. Through meditation the distinction between your feelings and those of others should begin to dissolve, while your compassion for all living things grows.

Of course, there is a strong strain of pacifism in Christian teachings too: “Love your enemies and pray for those who persecute you,” were the words of Jesus in the Sermon on the Mount.

But however any religion starts out, sooner or later it enters into a Faustian pact with state power. Buddhist monks looked to kings, the ultimate wielders of violence, for the support, patronage and order that only they could provide. Kings looked to monks to provide the popular legitimacy that only such a high moral vision can confer.

The result can seem ironic. If you have a strong sense of the overriding moral superiority of your worldview, then the need to protect and advance it can seem the most important duty of all.

Christian crusaders, Islamist militants, or the leaders of “freedom-loving nations”, all justify what they see as necessary violence in the name of a higher good. Buddhist rulers and monks have been no exception. 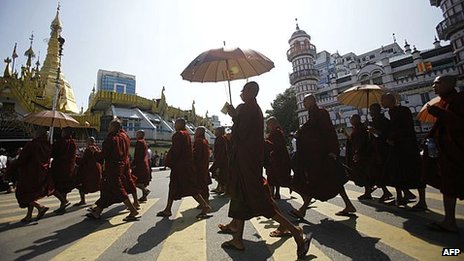 So, historically, Buddhism has been no more a religion of peace than Christianity.

One of the most famous kings in Sri Lankan history is Dutugamanu, whose unification of the island in the 2nd Century BC is related in an important chronicle, the Mahavamsa.

It says that he placed a Buddhist relic in his spear and took 500 monks with him along to war against a non-Buddhist king.

More on monks and violence

He destroyed his opponents. After the bloodshed, some enlightened ones consoled him that the slain “were like animals; you will make the Buddha’s faith shine”.

Burmese rulers, known as “kings of righteousness”, justified wars in the name of what they called true Buddhist doctrine.

In Japan, many samurai were devotees of Zen Buddhism and various arguments sustained them – killing a man about to commit a dreadful crime was an act of compassion, for example. Such reasoning surfaced again when Japan mobilised for World War II.

Buddhism took a leading role in the nationalist movements that emerged as Burma and Sri Lanka sought to throw off the yoke of the British Empire. Occasionally this spilled out into violence. In 1930s Rangoon, amid resorts to direct action, monks knifed four Europeans.

More importantly, many came to feel Buddhism was integral
to their national identity – and the position of minorities in these newly independent nations was an uncomfortable one.

In 1983, Sri Lanka’s ethnic tensions broke out into civil war. Following anti-Tamil pogroms, separatist Tamil groups in the north and east of the island sought to break away from the Sinhalese majority government. 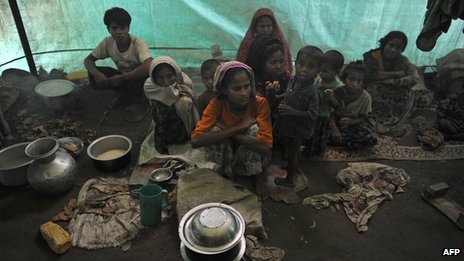 During the war, the worst violence against Sri Lankan Muslims came at the hands of the Tamil rebels. But after the fighting came to a bloody end with the defeat of the rebels in 2009, it seems that majority communal passions have found a new target in the Muslim minority.

In Burma, monks wielded their moral authority to challenge the military junta and argue for democracy in the Saffron Revolution of 2007. Peaceful protest was the main weapon of choice this time, and monks paid with their lives.

Now some monks are using their moral authority to serve a quite different end. They may be a minority, but the 500,000-strong monkhood, which includes many deposited in monasteries as children to escape poverty or as orphans, certainly has its fair share of angry young men.

The exact nature of the relationship between the Buddhist extremists and the ruling parties in both countries is unclear.

Sri Lanka’s powerful Defence Secretary Gotabhaya Rajapaksa was guest of honour at the opening of a Buddhist Brigade training school, and referred to the monks as those who “protect our country, religion and race”.

But the anti-Muslim message seems to have struck a chord with parts of the population.

Even though they form a majority in both countries, many Buddhists share a sense that their nations must be unified and that their religion is under threat.

The global climate is crucial. People believe radical Islam to be at the centre of the many of the most violent conflicts around the world. They feel they are at the receiving end of conversion drives by the much more evangelical monotheistic faiths. And they feel that if other religions are going to get tough, they had better follow suit.

Alan Strathern is a fellow in History at Brasenose College, Oxford and author of Kingship and Conversion in Sixteenth-Century Sri Lanka: Portuguese Imperialism in a Buddhist Land

Pamuk: Islam not irreconcilable with West