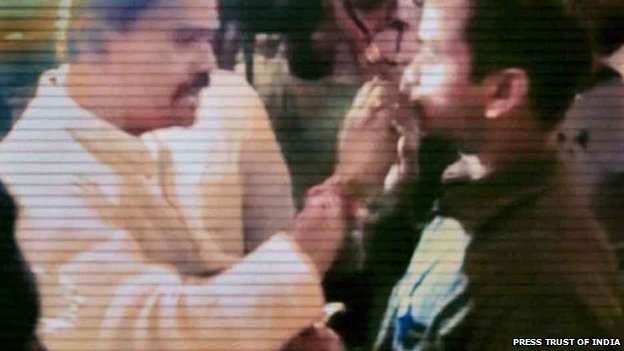 Opposition MPs in India have demanded an investigation into reports that some Hindu MPs tried to forcibly feed a Muslim man fasting for Ramadan.

The MPs from the right-wing Shiv Sena party reportedly took their anger out on a government canteen worker because of the “poor quality of food”.

Opposition MPs said the incident was a violation of religious belief.

Muslims around the world abstain from food and drink from before dawn until dusk during the Islamic holy month.

On Monday, the opposition parties, led by the Congress, protested in parliament against the incident and demanded an apology from the Shiv Sena.

In a letter to the speaker of parliament, a group of opposition MPs urged her to direct the government to carry out an “immediate inquiry and appropriate action so that such wanton behaviour is no longer repeated,” the Press Trust of India news agency reported.

The MPs described the incident as “controversial and inhuman as the victim of this barbaric act is a Muslim who is fasting during Ramadan”.

A video was aired on several news channels apparently showing one of its MPs trying to force bread into the mouth of the restaurant worker.

The MP involved, Rajan Baburao Vichare, said he was only trying to protest against the quality of the food.

“The canteen management here is in a bad state. The chapatis (bread) they made didn’t even break, the quality of vegetables and pulses is bad. Making this a religious issue doesn’t make sense,” Mr Vichare told a news channel.

Shiv Sena has a history of inciting religious violence. It was blamed for inciting tensions between Hindu and Muslim communities during the 1993 Mumbai riots, in which about 900 people died.

The party was founded to keep south Indian migrants out of Maharashtra state and to halt the spread of Islam.

It is currently the sixth-largest in parliament, with 18 seats, and is an ally of the ruling Bharatiya Janata Party.

From other news sites

Are We Seeing the End of Homeopathy?