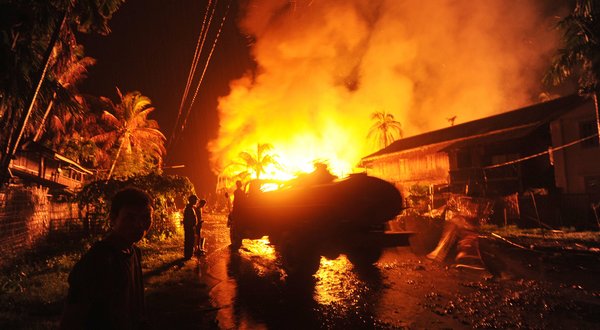 A fire on Friday in Rakhine State in Myanmar, where Rohingya Muslims and Buddhist villagers have been embroiled in deadly clashes for the past week.

BANGKOK — Over the past year, Myanmar’s government has ended its heavy censorship, allowing citizens unfettered access to a wide variety of Web sites that had been banned during military rule. When the government first began dismantling its Internet controls in August, visits to sites like YouTube soared.

Rohingya Muslims at a protest outside the Burmese Embassy in Kuala Lumpur, Malaysia, on Friday. The Rohingya are a stateless, oppressed people.

But as the poverty-stricken country of 55 million makes a delicate transition to democracy, hateful comments are also flourishing online about a Muslim ethnic group, the Rohingya, that is embroiled in sectarian clashes in western Myanmar that have left more than two dozen people dead.

“The lid of authoritarianism has come off, and people finally have the freedom to express themselves,” said U Aung Naing Oo, the author of “Dialogue,” a book about conflict resolution in Myanmar’s fractious society. “All these grievances have come out,” and “the voices of reason are on the sidelines for now.”

When the discovery of a “Rohingya body” was announced Thursday on the Facebook page of the Eleven Media Group, one of the largest private media organizations in Myanmar, one reader, Pyaephyo Aung, wrote that he had been “waiting for this kind of news for a long time.” Another reader, Ko Nyi, used a racial slur and said, “It’s not even enough that he is dead.”

In online forums, Rohingya are referred to as dogs, thieves, terrorists and various expletives. Commenters urge the government to “make them disappear” and seem particularly enraged that Western countries and the United Nations are highlighting their plight.

The violence in Rakhine State, which borders Bangladesh, has left 29 people dead and more than 2,500 houses burned during the past week, according to officials quoted in the Burmese news media. About 30,000 people have been displaced by the violence, according to the United Nations.

Harder to measure has been damage to Myanmar’s complex multiethnic fabric as the government of President Thein Sein tries to steer the country toward reconciliation between the military and the people, and between the Bamar majority and the dozens of smaller ethnic groups.

So far, the violence has been limited to Rakhine, which is relatively isolated from the rest of the country by a mountain range. But many among those who have posted angry comments on Internet sites have equated the Rohingya with other Muslims scattered around Myanmar. In Yangon, Myanmar’s main city, worshipers at mosques reported that prayer services left out traditional Friday sermons as a precaution against widening the sectarian conflict.

The issue of the Rohingya is so delicate that even Myanmar’s leading defender of human rights and democracy, Daw Aung San Suu Kyi, has been oblique and evasive about the situation. Asked at a news conference on Thursday whether the estimated 800,000 Rohingyas in Myanmar should be given citizenship, Ms. Aung San Suu Kyi was equivocal. “We have to be very clear about what the laws of citizenship are and who are entitled to them,” she said in Geneva, which she was visiting as part of a European tour. “All those who are entitled to citizenship should be treated as full citizens deserving all the rights that must be given to them.”

Defending the Rohingya, who are stateless and are described by the United Nations as one of the most oppressed minorities in Asia, is politically risky for both Ms. Aung San Suu Kyi and Mr. Thein Sein.

Mr. Thein Sein’s government is trying to rein in the news media to limit violence against the Rohingya. A popular publication called Hlyat Ta Pyet was banned this week for an indefinite period after it published what the government judged to be inflammatory coverage of the violence in Rakhine, said U Maung Myint, president of the Burma Media Association, which advocates media freedom.

The government has also ordered that all Rakhine-related news go through the censorship board, a rollback to the procedures during military rule. “This is the worst moment for media since the ‘civilian’ government assumed power,” Mr. Maung Myint said.

The Internet, however, has remained unfettered — and heavily tilted against the Rohingya. On Facebook and on news sites, there appeared to be very few comments this week defending the Rohingya or calling for reconciliation.

A United Nations report published in December described the Rohingya as “virtually friendless” among other ethnic groups in Myanmar. That is a polite assessment.

The source of the hatred toward the Rohingya is complex but appears to turn on religion, language, colonial resentment, nationalism and skin color.

In 2009, a Burmese diplomat who was then consul general in Hong Kong sent a letter to local newspapers and other diplomatic missions calling the Rohingya “ugly as ogres.” The diplomat, U Ye Myint Aung, compared the “dark brown” complexion of Rohingyas with the “fair and soft” skin of the majority of people in Myanmar.

The Rohingya are often called “Bengali” by their opponents in Myanmar, a term that suggests that they belong in India or Bangladesh.

Although they have been denied citizenship and are subjected to “forced labor, extortion, restriction on freedom of movement, the absence of residence rights, inequitable marriage regulations and land confiscation,” according to the United Nations, the government has allowed many of them to vote, including in the country’s first elections after military rule, in 2010.

Like the Roma of Europe, they are not wanted in either Myanmar or neighboring Bangladesh. United Nations officials in Geneva said Friday that Bangladeshi border guards were pushing back boatloads of people trying to flee. The boats, laden with women, children and others wounded in the violence, have been left drifting in the broad Naf River delta between the two countries, short of food and water, said the United Nations High Commissioner for Refugees.

The provenance of the Rohingya is as difficult to trace as that of many of Myanmar’s other ethnic groups: they appear to be a mixture of Arabs, Moors, Turks, Persians, Moguls and Pathans, according to the United Nations. Myanmar’s government counts more than 130 ethnicities in the country. The Rohingya are not on that list.

Many online commentators in Myanmar have called for the expulsion of the Rohingya — or worse. When the Eleven Media Group reported Thursday that a woman’s corpse was spotted floating in a river, but did not disclose the ethnicity of the victim, one reader said he was confused. “I don’t know if I should be happy or sad,” he said, “because I don’t know what nationality she is.”

History repeats with a twist

The Collective Trauma of Injustice