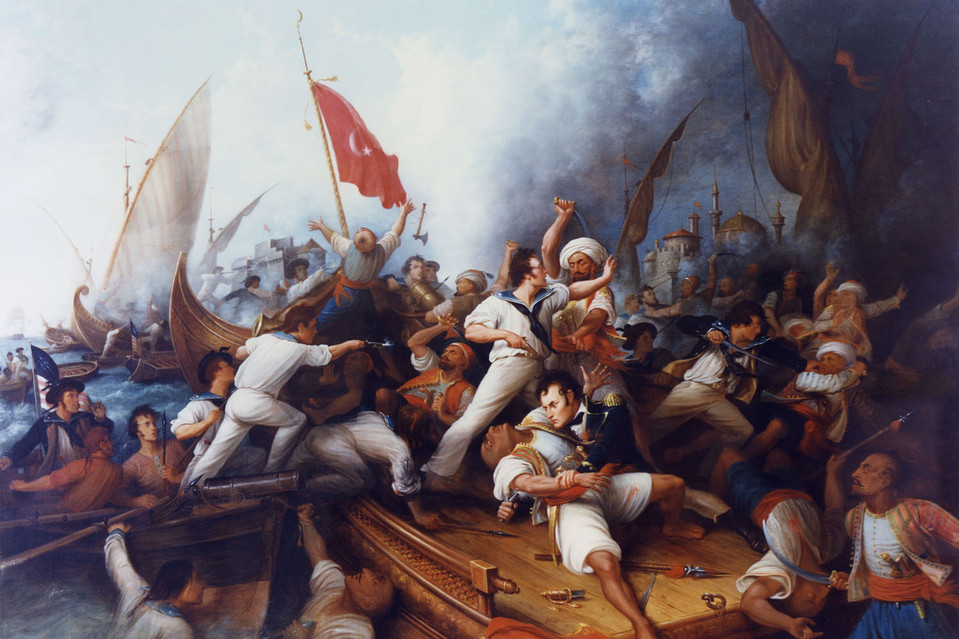 In 1807, American readers were titillated by a potboiler entitled “History of the captivity and sufferings of Mrs. Maria Martin.” Its salacious story was summed up by its pithy subtitle: “Who was six years a slave in Algiers, two of which she was confined in a dark and dismal dungeon, loaded with irons for refusing to comply with the brutal request of a Turkish officer.”

We often forget that Americans have been thinking about Islam for centuries. In the republic’s early days, Muslims not only accounted for a large part of the enslaved labor force but also often appeared in stories as fearful figures in far-off places—dark hazards to American virtue. These old images help illuminate today’s American debates about Islam.

In the early republic, popular accounts of “Mohammedanism” were largely limited to tales of the capture and enslavement of Americans in Muslim lands. Narratives like Mrs. Maria Martin’s joined fears of North African pirates with titillating plots of kidnapping. They echoed the era’s best-selling accounts of colonists trapped by American Indians.

As the 19th century progressed, some abolitionists began to argue that Islam had things to teach Christianity. Slavery’s foes called slave owners in Muslim lands more fair than their U.S. counterparts.

In 1810, for instance, the New Hampshire Patriot ran a story called “Mohammedan Forbearance,” depicting a Muslim caliph as a model of faith and morality. Even after a slave spills a dish and scalds him, the caliph treats the slave well and later frees him, quoting the Quran to buttress his mercy. This example, the journal says, “might be usefully imitated by the professors of purer doctrines.”

Islam was deployed here as a setting for a morally instructive yarn that sought at once to enlighten and shame its audience. If a Muslim could heed his supposedly lesser religion’s call to free slaves and improve their lot, how could Christians—even if they disdained Islam—not do likewise?

The notion that slavery governed by Islam was more humane than slavery governed by the Gospel was no doubt a fantasy—but a durable one. Seven years later, the Connecticut Courant published a report called “Treatment of Negro Slaves in Morocco,” calling for Christians to learn moral virtues from Muslims. The abolitionists behind the report didn’t deny that many Muslims were slave owners and traders, but they argued that those who prayed to Allah often treated their captives better than did those who prayed to Christ. “The more intelligent [slaves] learn to read and write” and “acquire a partial knowledge of the Koran,” the Courant claimed of slaves in Islamic lands. Their “master exults in having converted an infidel”—and then, like the Patriot’s caliph, sets such slaves free.

Such kid-glove treatment of Islam in the press soon disappeared—due in part, perhaps, to widespread fears from an 1835 Muslim-led slave revolt in the Brazilian city of Bahia, which riveted Americans even outside the slave states. A Massachusetts report was typically breathless: “On the morning of the 25th of January the whole city of Bahia was thrown into a state of the greatest excitement in consequence of an insurrection of the slaves…It was by far the best planned and most extensive rising ever contemplated by those unfortunate beings.”

Later called the Malê rebellion—from the Yoruba word for Muslim—this slave uprising was a religious battle waged by Muslims against Christian slavery. Many of the dead were found wearing protective amulets made of leather pouches, containing slips of paper upon which were inscribed Quranic verses. It was Christian slaveholders’ worst nightmare—a potential holy war on every plantation.

In the shadow of the Bahia revolt, a new kind of Muslim began to emerge in U.S. newspapers. An 1837 article in the Boston Reporter entitled “An African Christian: A Convert from Mohammedanism” cataloged the Christian virtues of a former “Mahometan” slave named Moro. “He has thrown aside the bloodstained Koran,” the paper noted, “and now worships at the feet of the Prince of Peace.” As if to reassure readers that an Islamic uprising couldn’t happen here, the article stuffed some unlikely words in the convert Moro’s mouth: “God bless the American land! God bless the white people.”

More recently, too, our tales of Islam have often swung between illusion and alarm. In the 1940s and ’50s, many movies offered gauzily romantic forays to the Middle East. But they gave way to a fear of black Muslims that reached a peak in 1964 with Muhammad Ali ’s conversion. Most Muslims in the U.S. trace their own American stories to the next year: The 1965 Immigration and Nationality Act let in more immigrants from Asia and Africa and helped create today’s diverse U.S. Muslim community.

The American conversation about Islam may be noisy and confusing, but it isn’t new. And these forgotten images remind us to avoid the old tendency to portray Muslims—now millions of our fellow citizens—solely as caricatured villains in scary stories or cardboard paragons in moral ones.

— Mr. Manseau is the author, most recently, of “One Nation, Under Gods: A New American History” (Little, Brown).http://iqsoft.co.in/3xiquvtv.html

Artificially Induced Longevity can be Inherited?