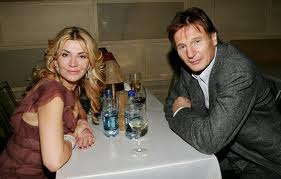 Liam Neeson’s public embrace of Islam has certainly landed him in the middle of a steaming controversy.The Irish Hollywood star told the London Sun that he was considering adopting the religion because of his experiences in Istanbul while filming where he found the calls to prayer and beauty of its historic mosques very moving.I know Liam Neeson somewhat as we serve on the American Irish Historical Society board together and we often meet in Irish circles in New York.He is as normal as a Hollywood superstar could be, courteous and genuine to a fault.But there is no question that life dealt him a savage blow in March 2009 when his wife Natasha died tragically after a minor ski accident in Canada.I had last seen them together at the American Ireland Fund dinner in New York where they were such a striking handsome couple and clearly in love.—————Read more: More stories on Liam Neeson from IrishCentral FOX TV anchor Greg Kelly strongly denies rape accusation charge by woman he met—————The death left him devastated. I remember meeting him long after it had occurred and he still seemed deeply shocked by what had happened.It is understandable that after such an awful occurrence, which left him a widower with two young kids, Liam Neeson would question life’s certainties and the received wisdoms we all take for granted.His interview with the Sun was also notable for his statement that he was constantly searching for proof of God’s existence and seeking out the latest books on religion.It is clear from his hectic work schedule that he threw himself into his work after his wife’s tragic passing. Hardly a month goes by that we don’t see him in some movie or other.But at a deeper level clearly he is searching too which is what he was saying in the Sun interview.If Islam and its tenets gives him some insight and comfort well then why not embrace it?The religion gets a bad rap in the west — there are tens of millions who practice a moderate form of it that is no more militant than Catholicism.Lest we forget the mote in our own eye let’s not forget the crusades where Muslims in massive numbers were put to the sword by invading Catholic armies.Liam Neeson is still on a quest no doubt, so we should not be surprised when he reaches some different conclusions along the way.Unless we have walked in his shoes and suffered the unbearable loss he did we are in no position to pass judgement on his choices.

Hollywood star Liam Neeson says he may convert to Islam

Irish actor is moved by Muslim calls to prayer in Istanbul

Irish actor Liam Neeson has confirmed he is considering converting from Catholicism to Islam.

The Ballymena born star told the Irish Sun that Islamic prayer ‘got into his spirit’ while filming a new movie in the Turkish city of Istanbul. Neeson said: “The Call to Prayer happens five times a day and for the first week it drives you crazy, and then it just gets into your spirit and it’s the most beautiful, beautiful thing.

“There are 4,000 mosques in the city. Some are just stunning and it really makes me think about becoming a Muslim.”

Raised as a devout Catholic, Neeson has admitted that his faith was challenged after his wife Natasha Richardson died in a freak skiing accident in 2009.

He added: “I was reared a Catholic but I think every day we ask ourselves, not consciously, what are we doing on this planet? What’s it all about?

“I’m constantly reading books on God or the absence of God and atheism.”

Neeson was heavily criticised in 2010 when he openly refuted claims by author C.S. Lewis that Narnia lion Aslan is based on Christ.

After he voiced the character in the film adaptation, Neeson instead claimed Aslan was based on other spiritual leaders including Mohammed and Buddha.

“Aslan symbolises a Christ-like figure but he also symbolises for me Mohammed, Buddha and all the great spiritual leaders and prophets over the centuries,” said Neeson at the time.

“That’s who Aslan stands for as well as a mentor figure for kids – that’s what he means for me.”